Here it is, my new favorite place…Blue Point Bay at Uluwatu. It’s a surfer’s paradise. In another life, I will be a surfer (or maybe a dolphin) but for now, I am content to sit amongst them and watch. Blue Point is basically in the side of a cliff. It’s a series of deep switchbacks and on each level there are tiny little shops, cliffside bars and food stops. Each spot you come to has to be the best view you’ve ever seen, and then you come to the next one and it’s even better.

We had lunch here and we watched surfing…BIG WAVE surfing…and I love loved it. 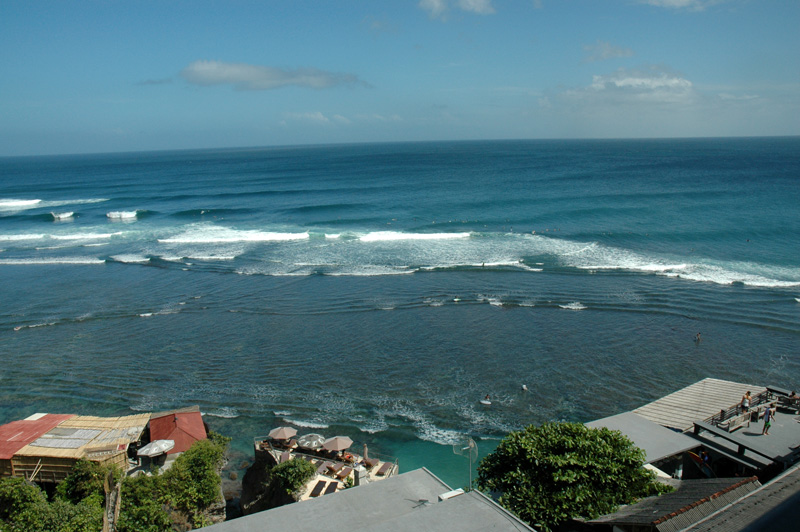 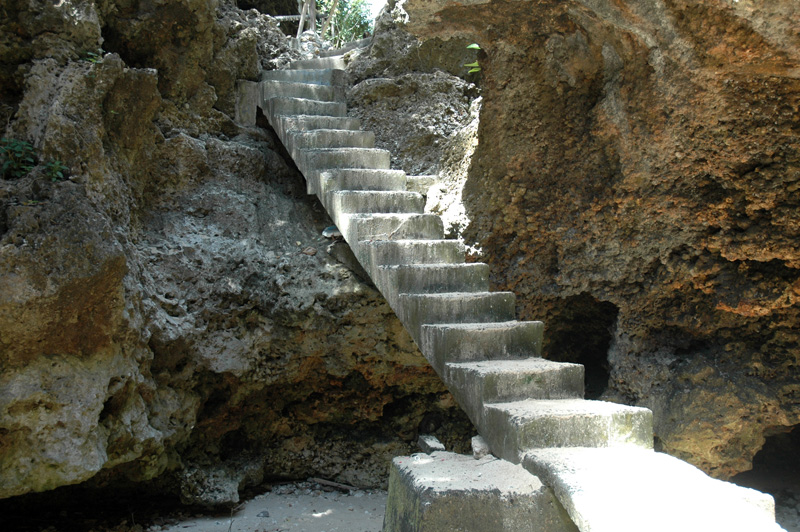 Here is the lowest level, the scary steps down onto the beach 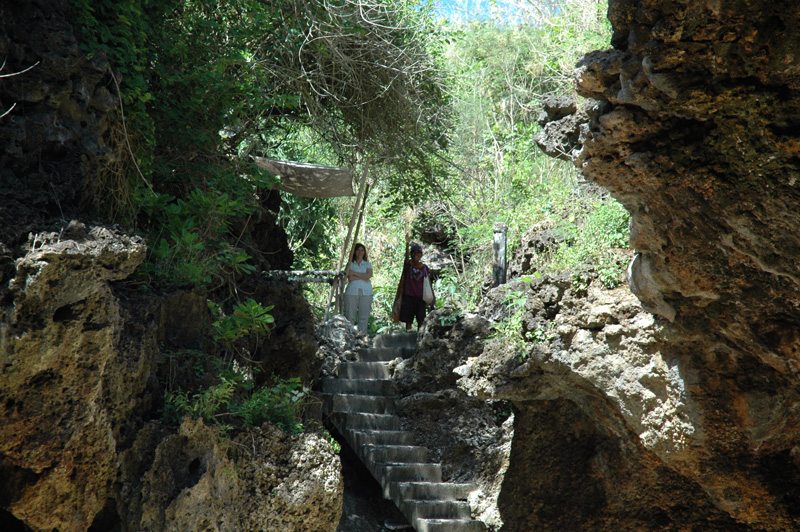 Here is me after deciding I could not go down those steps. The very old local lady beside me offered to help me, but I declined. 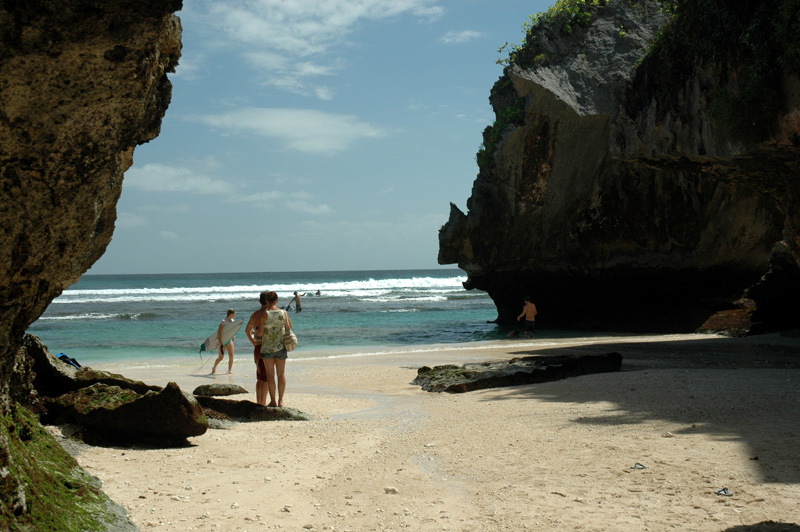 The beach Aly saw upon reaching the bottom of the steps. 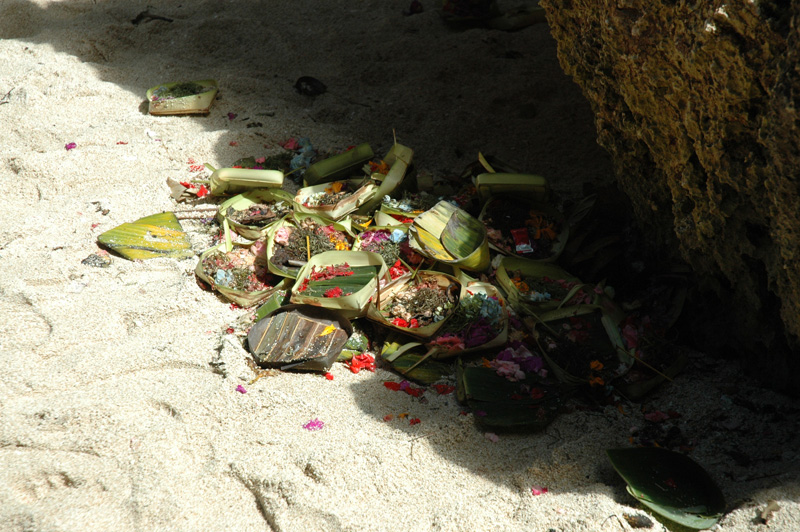 Offerings on the beach 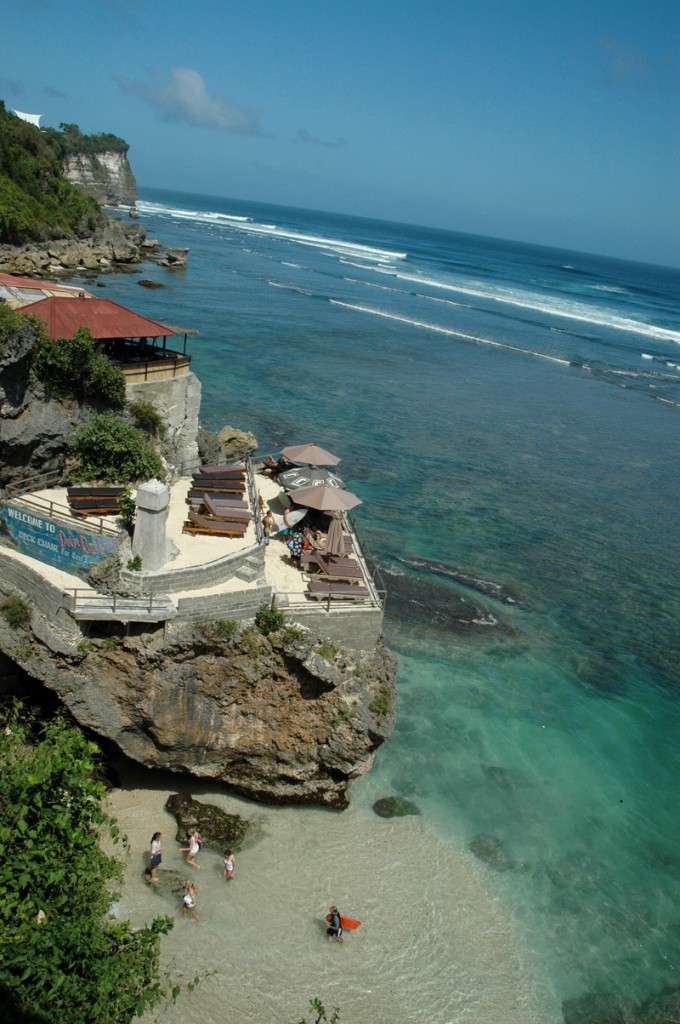 We went back up the cliff about half way to get a good viewing spot for lunch. This is the view we decided on. 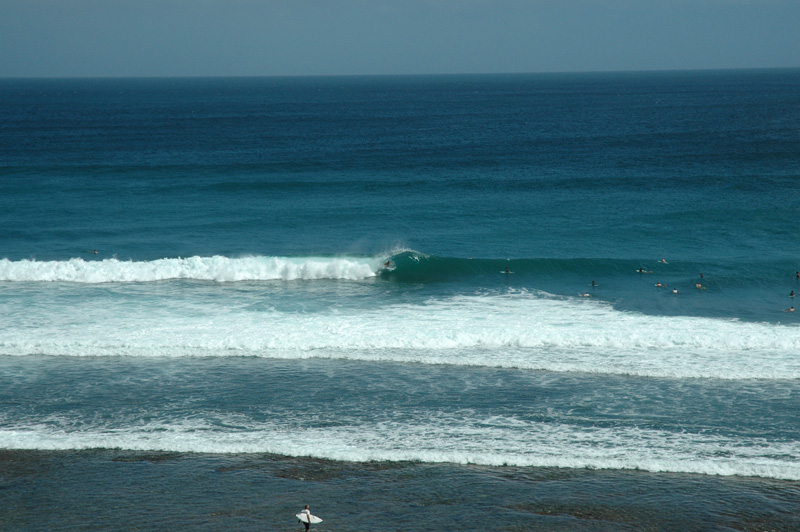 We watched surfers for a really long time, like a few hours. I could have stayed there for the rest of our trip. 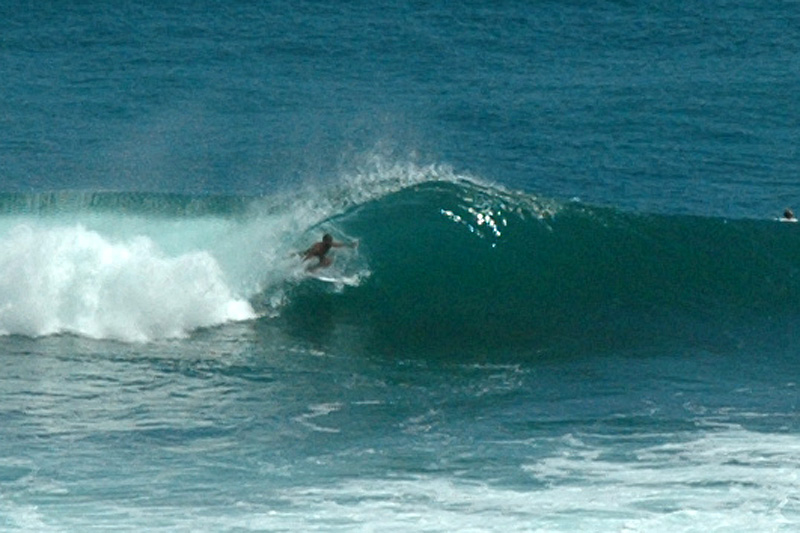 Here’s a blown up version of the above pic so you can see what the dude is doing. This is real, big wave surfing. Even though they looked tiny from our viewpoint, we could still see what was going on, and knew this guy was catching a good wave. 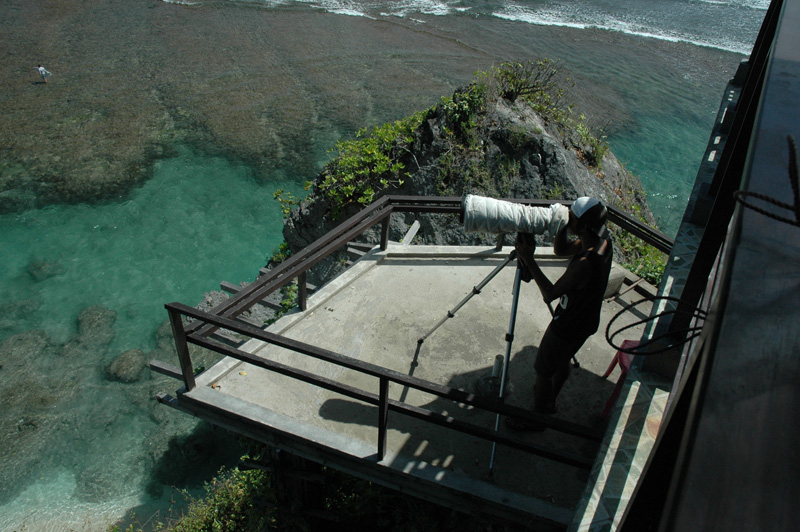 But to see it for realz, you need to have a camera like this dude. There were a few camera viewing spots on the cliff, and there were shops selling the photos. They knew the surfers and when they saw them that would tell them, “I got a great shot of you out there today…come and see.” 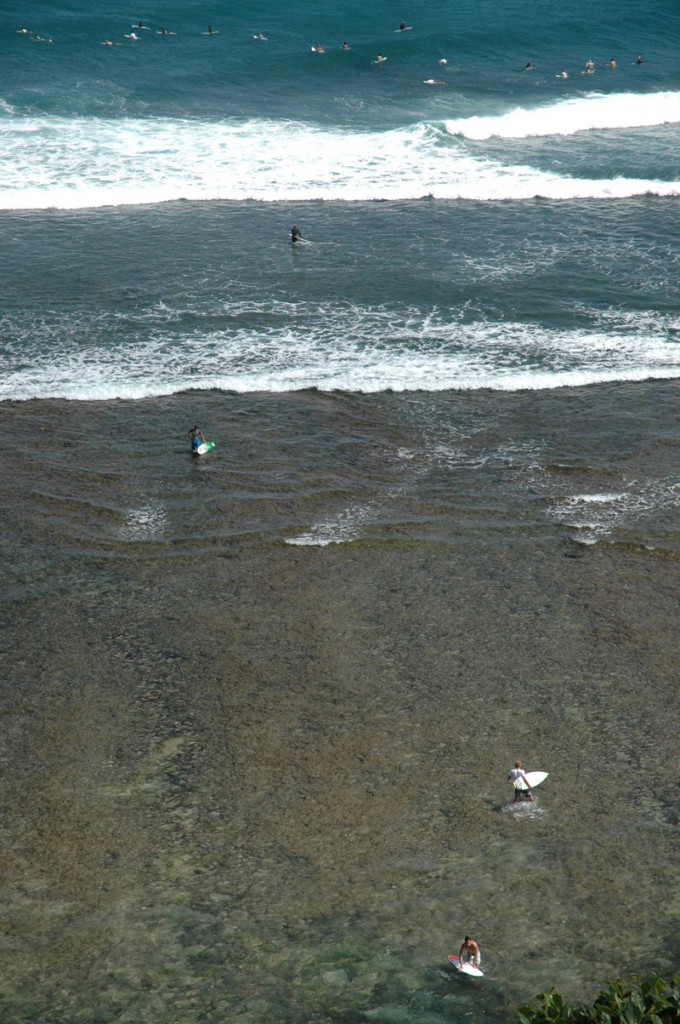 The surfers really had to WANT to surf. There was a long uncomfortable walk on a rocky corally bed to get out there. No matter how tough they looked out in the surf, everyone looked fragile on the painful walk out and in. 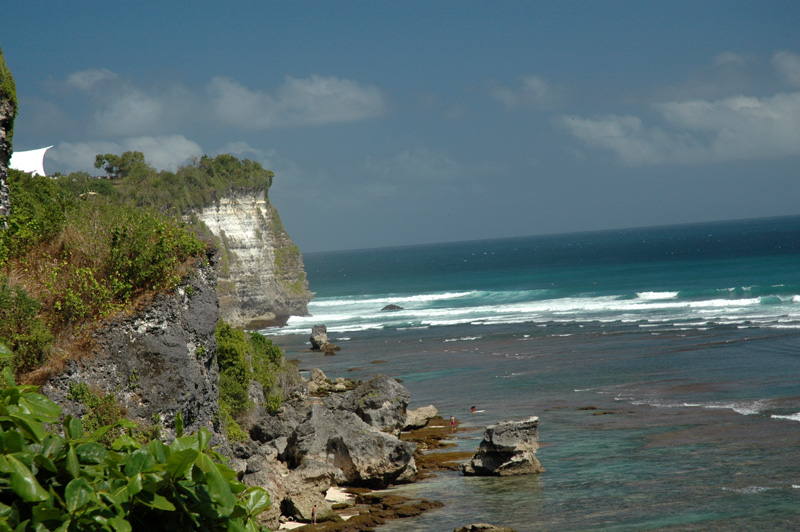 Thanks to our driver, I got to mark something off of my bucket list. I have seen big wave surfing in a gorgeous and fun location. I now have a new item on my bucket list tho…”Go Back to Blue Point.”

One of my bucket list things to see has always been big wave, full tube surfing. I was hoping that this trip would offer me a glimpse of that either in Bali or Thailand. It just so happened that while we were driving to Uluwatu Temple, we saw signs for the Rip Curl Cup Surfing Competition which ran from July 15 – August 26 in Padang Padang. Wha? It’s July 15! YAY!

The tagline for the event is “It’s on when it’s on.” So this means that the event, which will actually be on one day, some time within this window. The forecasters will be on the lookout for a day that looks like it would have the “epic swell” and they call it, with the surfers having 24 hours to make it to Padang Padang for the event.

Padang Padang is a small beach at the bottom of a cliff, with many steps and a cavelike tunnel to get down to it. 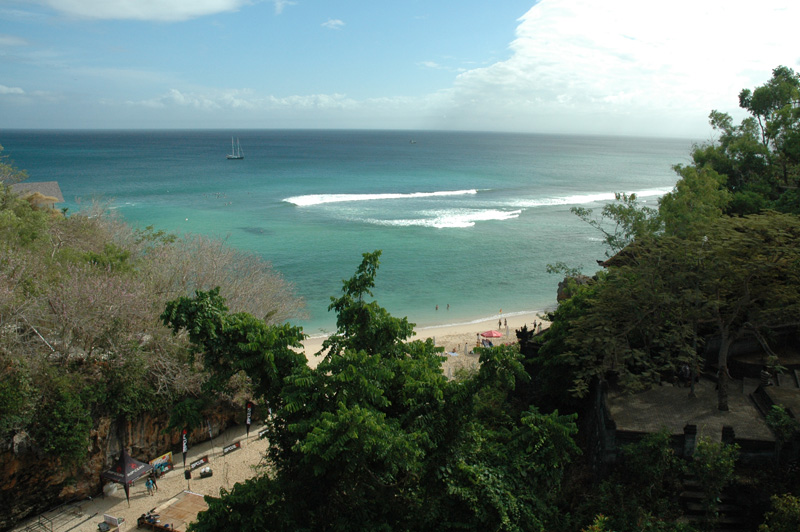 From the bridge at the top of the cliff, here is Padang Padang Beach, with the Rip Curl Cup stage getting set up 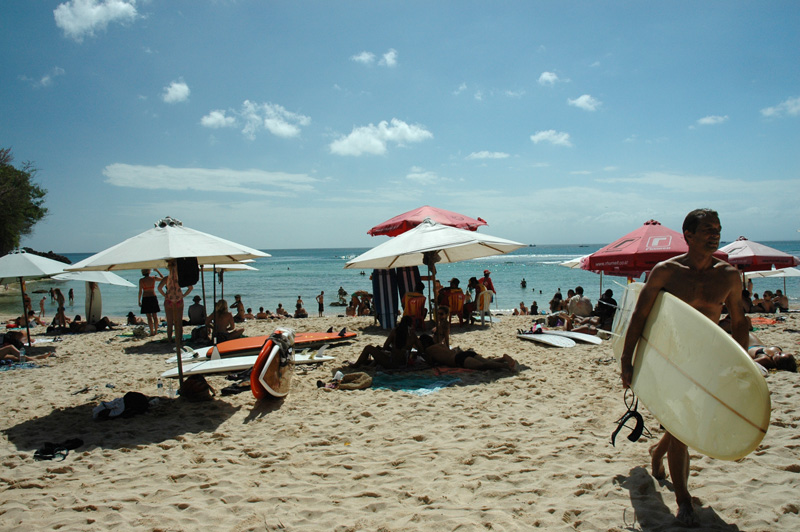 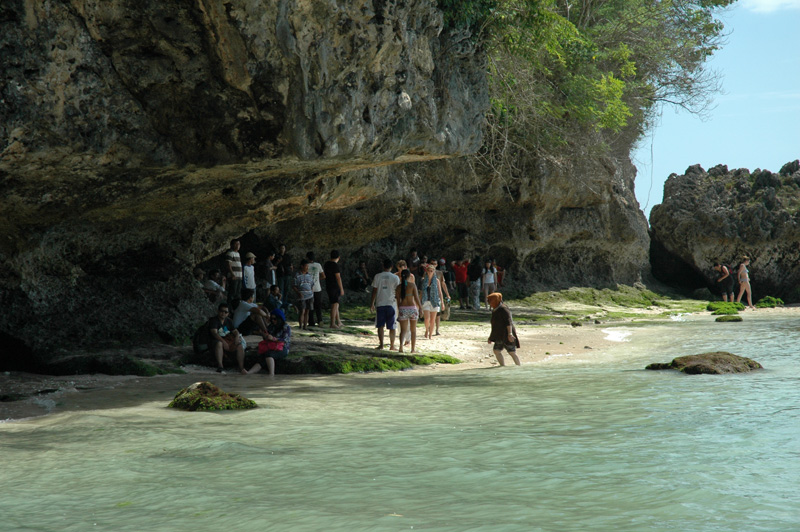 The beach is nestled into the cliffs, with lots of cliff overhangs that provide shade and shelter (assuming it’s not underwater:-) 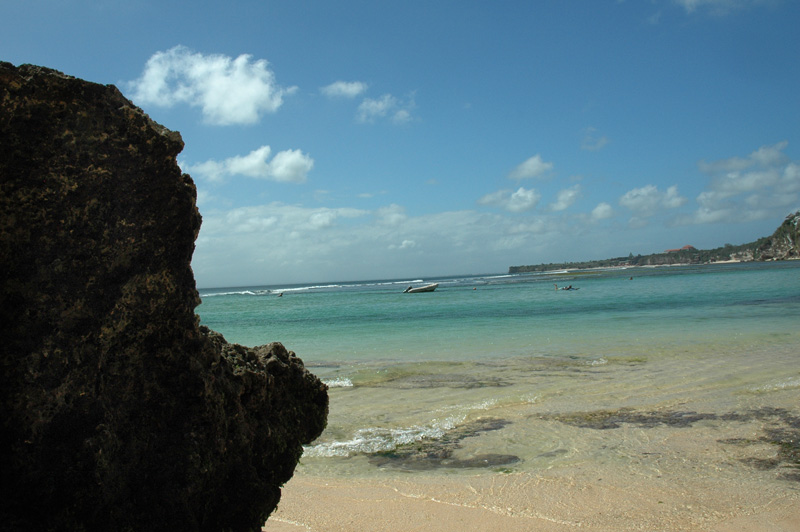 The water looks gorgeously blue-green and is completely clear when you stand in it. These are the beach colors I’ve been looking for! 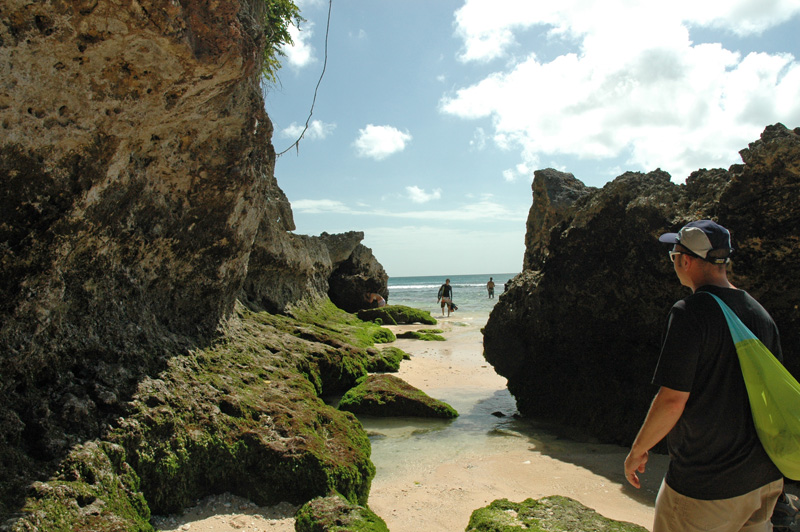 When the tide is down, there are many rocky nooks and crannies to explore 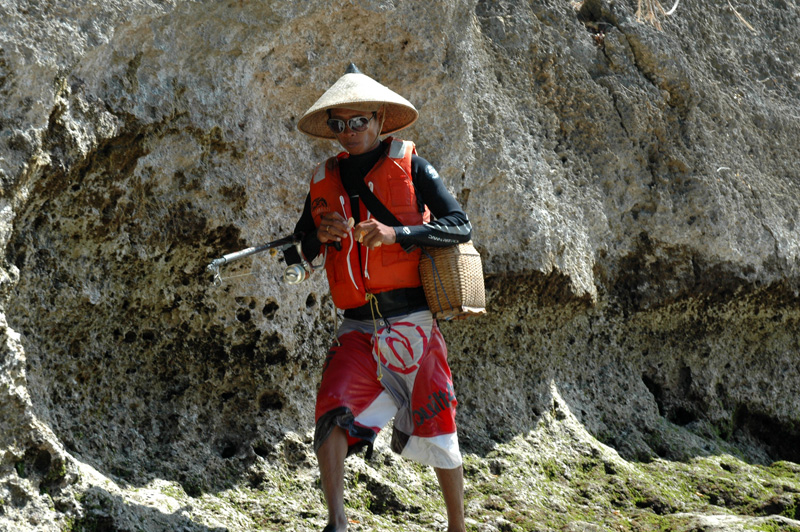 Apparently some good fishing too…this dude is done for the day. 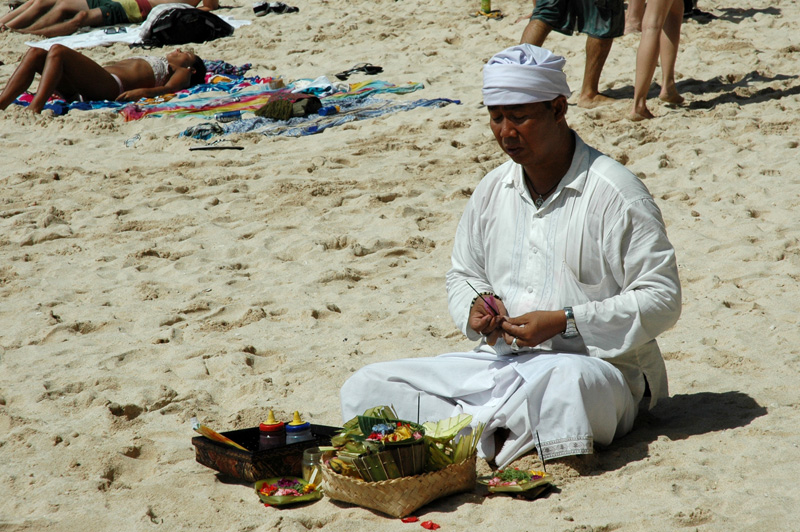 The awesomeness of Bali’s Hindu culture…there are offerings everywhere, even on the beach. 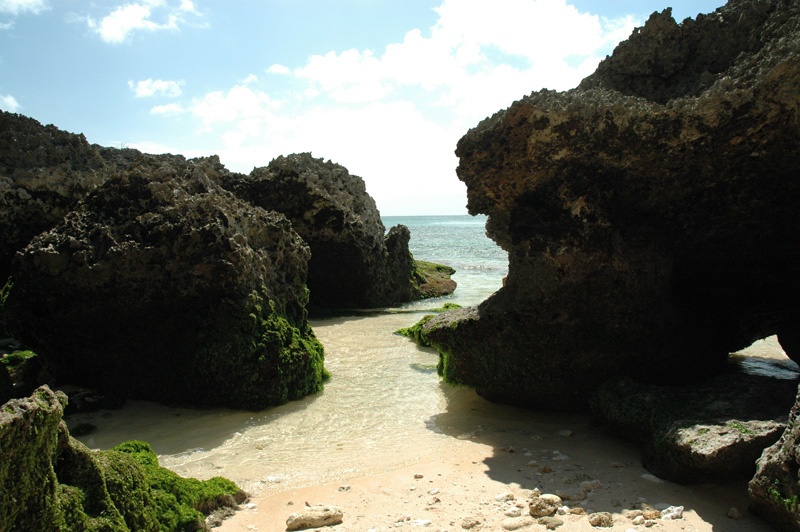 Just another little area to explore 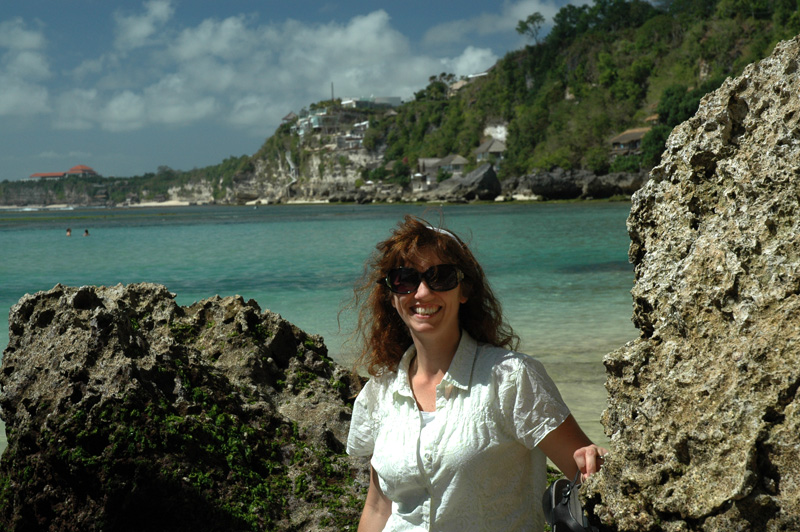 Well, didn’t see much surfing here, but it was still well worth the visit.

So, living in North Carolina, and spending a month every summer in Ormond Beach, Florida while growing up, has me a little spoiled as far as beaches go. So, I felt a little guilty about my disappointment with Sanur. The water was a little clearer, the sand was a little whiter, the waves were a little gentler, but it just wasn’t different enough to be a wow. Poor me, right?

As an aside, I mentioned to our driver that I wanted to see some big surfer waves and the most beautiful beaches of Bali, but that I assumed we didn’t have enough time to get to such a location on our last full day in Bali. He thought differently, and suggested he take us to the temple at Uluwatu and afterwards to some of the beaches in that area. We would see cliffside ocean vistas, the temple on the cliff top, and big surf.

Well, I got what I needed with those suggestions…some of the most beautiful places I’ve ever been… will finish this post with the temple itself… 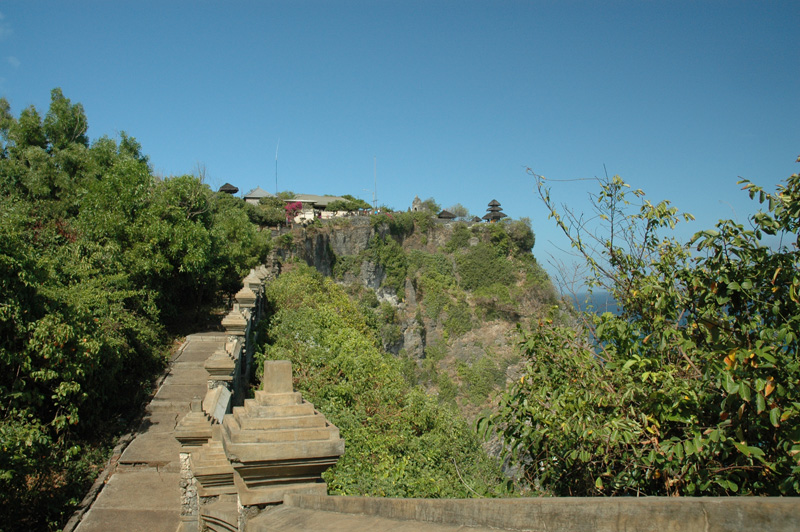 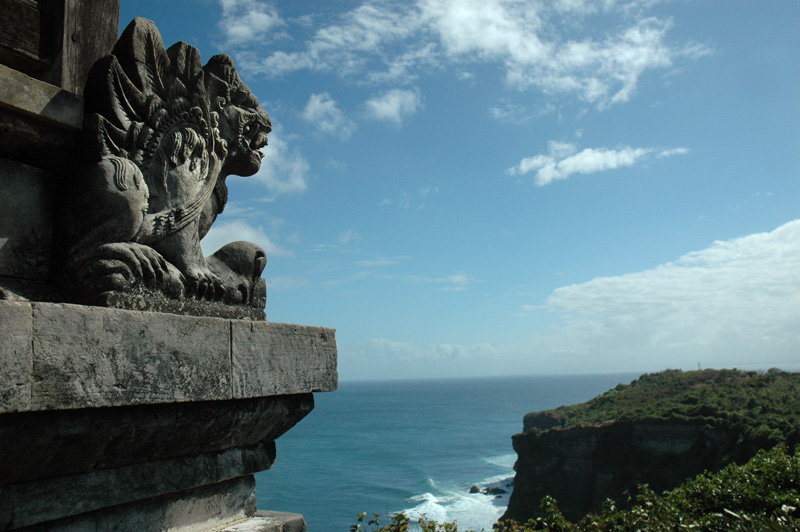 Climbing up the steps towards the top allows you to meet many different stone creatures, each of them having a more beautiful view than the previous one of the cliffs and waves crashing below 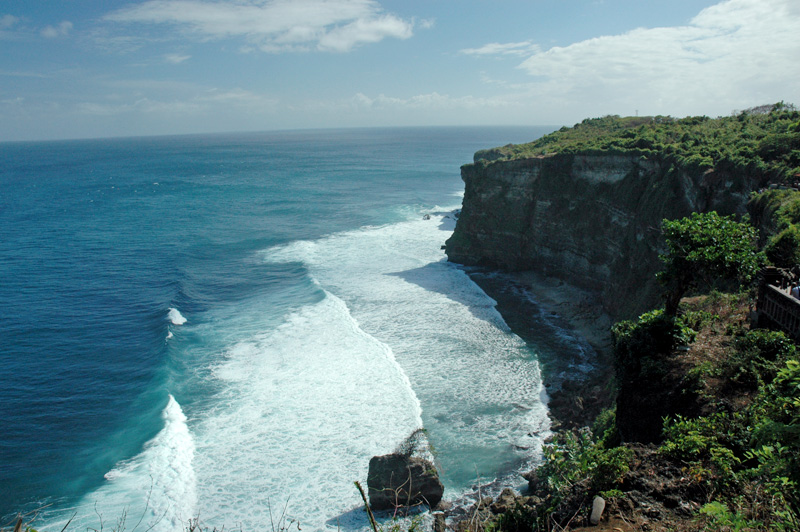 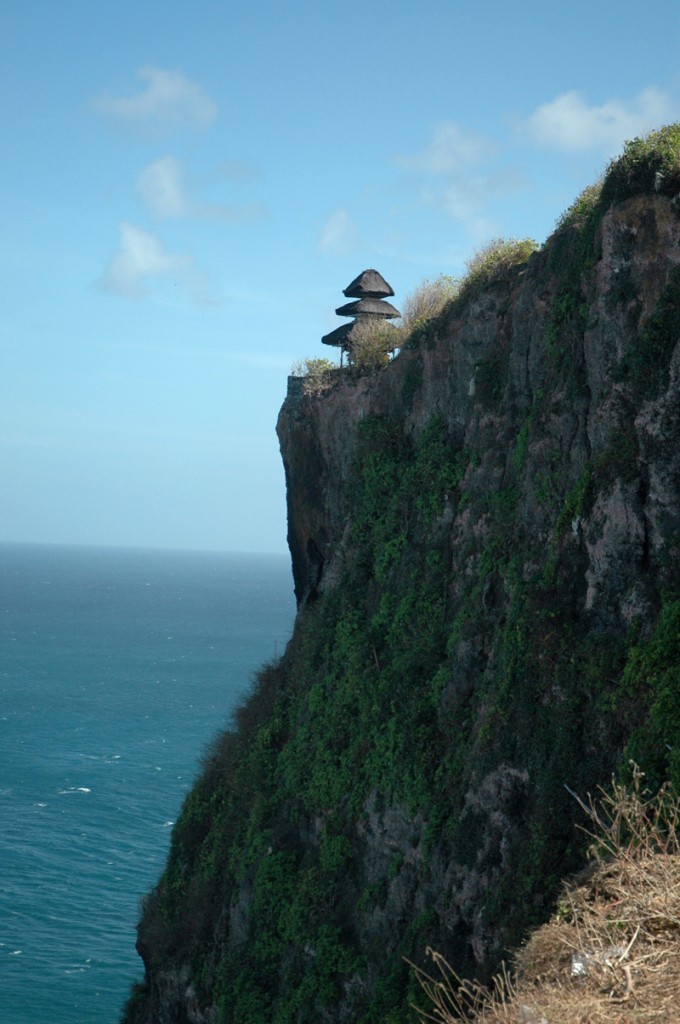 The Uluwatu Temple at the top of the cliff 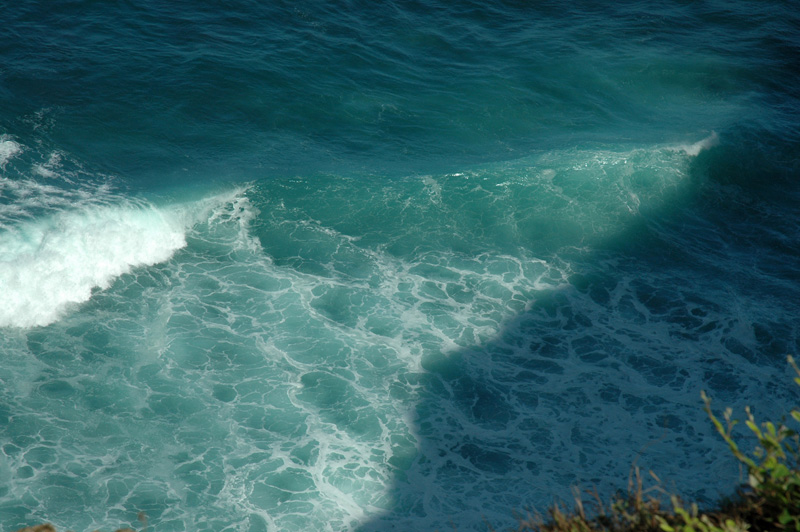 The yummy color of Uluwatu waves, 250 ft down 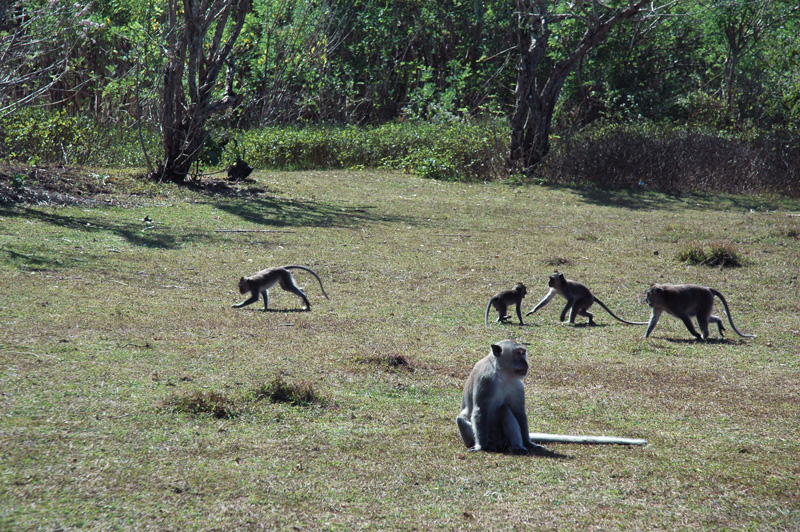 there are monkeys at the top…lots of them. They are all running around being cute, except they will steal your hat, your sunglasses, your food. they will not hesitate. We saw one monkey steal some sunglasses and then put them on and sit and pose for photos…hilarious (unless they are your glasses). 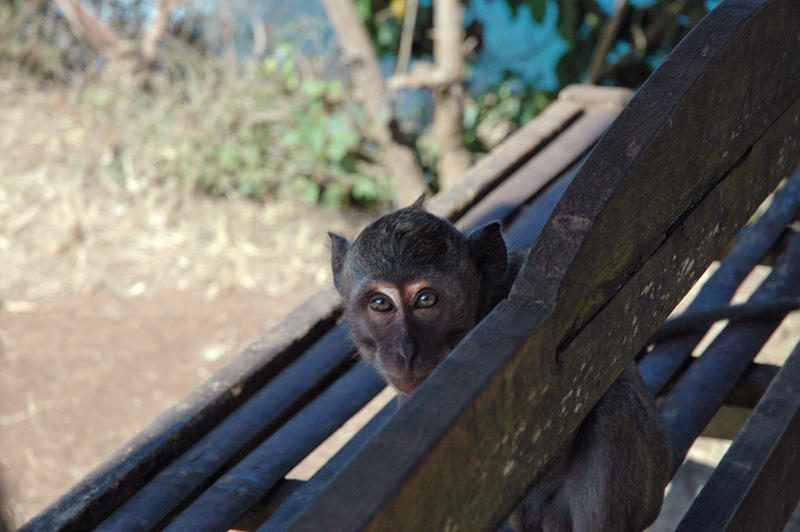 I got really close to this little dude. He was cool with it, and then he let me know he wasn’t cool anymore. He got up and gave me a look right into the lens that said, “Outta my face or I take that!” Needless, to say, I backed off… 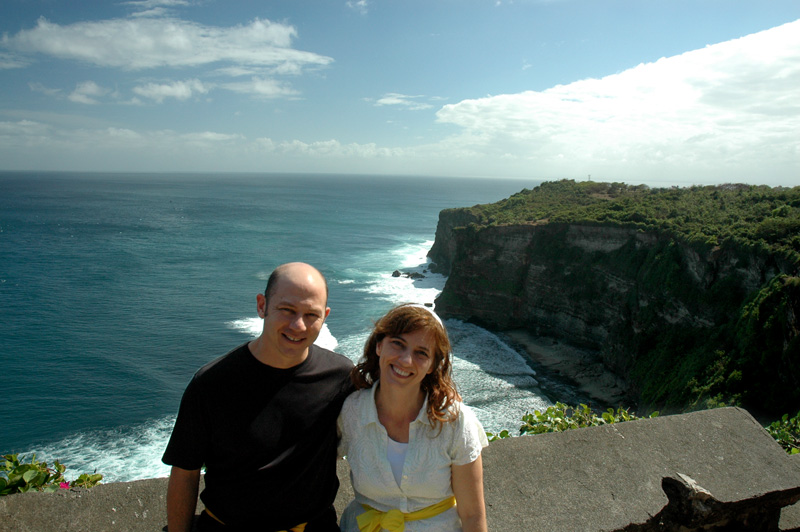 Here we are, enjoying the beauty of Uluwatu Temple.

We were fortunate, and got to the temple before the masses showed up. We had to share  a little bit, but not too much… Can definitely see why a temple was put here…the absolute beauty of the natural surroundings is the perfect spiritual foundation.